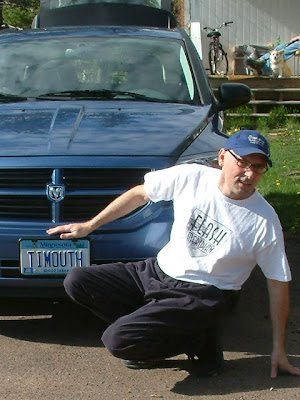 Hi, Neon. Sorry to hear the news about your death. Oh, didn’t you get the memo? You had a good run but it would seem that you’re being replaced by the all-new 2007 Dodge Caliber. Hope you don’t mind. If you can you leave your security pass at the door, that would be great. Thaaaanks. And, hey, there’s always hope that you’ll get resurrected when Dodge’s marketing wonks run out of fresh ideas and start thinking retro. Check back with them in, oh, say, 2034.

For the rest of us, welcome to the new Caliber. This is a completely new model for Dodge and it serves as the company’s most affordable car — starting MSRP is $13,985, including destination. In just about every regard, it’s better than the Neon. True, overcoming that hurdle isn’t particularly difficult given the Neon’s geriatric age. But even against newer competing vehicles like the Mazda 3 hatchback and Toyota Matrix, the Dodge Caliber shapes up as being something that interested hatchback-buying consumers will want to check out.

Oh, yes, perhaps we should mention that the Caliber is a four-door wagon/hatchback. Want a sedan version? Sorry, my friend, no such thing.

All-new metal
It would seem that Dodge decided a compact hatchback is a swell idea in light of America’s recent and slightly elevated interest in smaller, more fuel-efficient vehicles. The Caliber is not a hard-core fuel miser, though, and is instead a pretty normal-sized compact. It features an all-new chassis design, and is being built at DaimlerChrysler’s retooled Belvidere, Illinois, plant. (This plant also spawned the Neon and will be used for the 2007 Jeep Compass.)

From the start, Dodge designed the Caliber so that it could be offered in other world markets, and left- and right-hand-drive models are set to be exported under the Dodge brand.

For the Caliber’s initial launch in North America, Dodge has three styles available (SE, SXT and R/T) and a hat trick of four-cylinder, twin-cam engines: a 1.8-liter, a 2.0-liter and a 2.4-liter. These are all-new engines and have been designed in conjunction with Hyundai and Mitsubishi. Their architecture is fully up-to-date, including variable valve timing for both camshafts, aluminum construction and, for the two larger engines, dual balance shafts.

The goal of improved fuel economy has also played a role in the Caliber’s transmission offerings. While the 1.8-liter gets a traditional five-speed manual, the 2.0-liter and 2.4-liter engines have a continuously variable transmission (CVT). In general, CVTs can help a car deliver better fuel economy than what would otherwise be possible with a traditional four-speed automatic transmission.

Your equipment, Sire
The 1.8-liter engine is standard on the SE and SXT styles, and the 2.0-liter is optional. Both send their power to the front wheels. The Caliber R/T is unique in that it comes with the 2.4-liter engine and an automatic four-wheel-drive (4WD) system. This system is electromagnetically controlled and in normal driving conditions sends 100 percent of the engine’s torque to the front wheels.

In a low-traction environment such as a rain-slicked road or a gravel trail, the R/T can automatically send up to 60 percent of engine output to the rear wheels. The 4WD system also monitors and responds to the driver’s throttle inputs. Early on, Dodge will offer the R/T with 4WD and the CVT only. Company officials say that a front-drive, five-speed-manual R/T version will come later.

Dodge has made a wide range of equipment available for the Caliber, and overall it’s about what we would expect for this class of car. The quick 411: The SE is a stripper. Air conditioning and power windows, locks and mirrors are all optional. Those features come standard on the SXT, as well as 17-inch wheels and a reclining feature for the 60/40-split-folding rear seats. The R/T is equipped pretty similar to the SXT but has 18-inch wheels, performance tires, standard rear disc brakes and sport-tuned versions of the suspension and steering rack.

Full-length, side curtain airbags are standard on all Calibers. Front side airbags are optional, and stability control becomes available later this year. In terms of special features, Dodge is proud of the Caliber’s cooled beverage slot in the glovebox area. Dubbed “ChillZone,” the slot can hold up to four plastic drink bottles and draws air from the A/C system.

The path ahead
We had the opportunity to check out the Caliber during its press introduction in Phoenix, Arizona. For our brief drive, we sampled a 2.0-liter SXT and an R/T. In terms of versatility, the Caliber scores pretty high.

The rear seats fold flat easily, and the front-passenger seatback can be flipped forward to allow the loading of long items, such as a ladder. The rear hatch opens and closes easily, and the cargo load floor is vinyl, which should make cleanup simple. With the rear seats lowered, there’s 48 cubic feet of cargo room available.

For carrying people, the Caliber offers up decent legroom, headroom and seat comfort. Like most compacts, the Caliber’s rear seat is best for just two adults.

For most daily driving situations, the Caliber performs well. It rides comfortably without being too soft, and has a tight turning radius. Thanks to its relatively large and sticky tires, the Caliber R/T delivers decent grip on curvy roads, and it also comes with a sequential-shift mode (AutoStick) that creates artificial gear ratios for the CVT. Using AutoStick allows the driver to better keep the engine high in the rev range, though “upshifts” occur automatically when redline is reached.

In terms of acceleration, we can only describe the Caliber as adequate. The SXT was about what we expected but, oddly, the R/T didn’t seem any quicker than the SXT. A subsequent check of the Caliber’s specs indicated that the R/T actually has a worse power-to-weight ratio than a 2.0-equipped SXT. Blame the added weight of the 4WD system. For driver interaction and fun, we think the hatchback to beat is still the Mazda 3.

The 2007 Dodge Caliber’s arrival, slated for this spring, doesn’t include parades and fireworks. Unlike Chrysler’s PT Cruiser’s debut, the Caliber is entering a segment that already has many established players. That the Caliber is competitive is testament to its quality and features.

Dodge has all the basics right, and the Caliber is a solid car for the average buyer. But our initial impressions were dampened by the lack of driving excitement. If the Caliber were a Buick, this feeling would be a nonissue. But this is Dodge we’re talking about, home of the Viper and the Charger SRT-8. Performance-oriented hatchback buyers will likely want to wait at least until the five-speed manual R/T becomes available, and preferably for the SRT version.